We've blogged about quick-grilling chops on the Guardian Service Griddle/Broiler, but for thicker cuts (like these lovely pork chops) we tried a slower approach in the large Guardian Service Chicken Fryer, with its "self-sealing, self-basting cover."

Using a vegetable (in this recipe, onions) to support the meat as a "roasting rack" is a key technique with waterless cooking and further flavors the meat while allowing the vapors of Madeira to envelop the chops as they simmer. 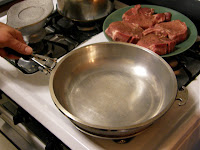 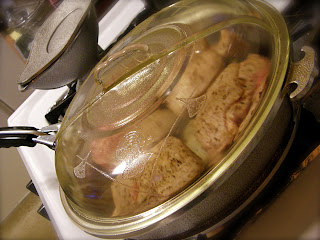 Served with a sauce and vegetables (we served Guardian Service potatoes and golden beets cooked in the Economy Trio Cookers and a Garlic Prune Sauce) this makes an elegant meal for four for $20-25 (depending on the cut of meat) in under 2 hours. 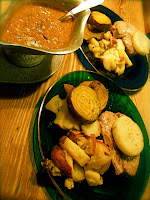 In a small cooker (like the Guardian Service Tom Thumb), sauté garlic for two minutes in rendered pork fat and/or cooking oil, then add prunes, parsley and orange juice and cook for 10-12 min until reduced to a sauce. Add spices and corn starch or barley malt for thickening and keep warm in the Guardian Service Gravy Boat to serve with baked pork chops.
Posted by Unknown 1 comment: