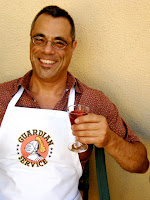 This weekend's NY Times launched 2011 with a series on sustainable living which included two great pieces on America's evolving diet.

The first is a jeremiad by Mark Bitmann about cooking simply at home (and a satisfying response to a September article which suggested preparing vegetables was too arduous and specialized for junk-food-addicted Americans). While he doesn't talk about waterless cooking techniques, Bitmann does sing the praises of increased nutrition and economy that attend home cooking:


"By becoming a cook, you can leave processed foods behind, creating more healthful, less expensive and better-tasting food that requires less energy, water and land per calorie and reduces our carbon footprint. Not a bad result for us — or the planet."

A Happy New Year to our readers and wishes for Good Health, Pleasure and Profit for all in 2011!

PS Guardian Service Santa was able to hunt down a Guardian Service Pressure–Oven with which we'll experiment in the coming months. I'm poring over the original pressure cooker guide, but it's uncharted territory... let's hope we're not scraping pot roast shrapnel off the ceiling. Wish us luck!
Posted by Unknown No comments: