Here in the San Fernando Valley, daytime temperatures are already climbing into the 80s, so when the afternoon sun floods our mid-century kitchenette and we muse over what to fix for dinner, roasting a chicken isn't the first thing that springs to mind. But cooking stovetop with the Guardian Service roaster means there's no need to fire up the oven—we can cook most of the meal over a single low burner. And no need to burn still more energy running the air conditioners. In the dog days of summer, we've even cooked this meal over coals on a hibachi (sans gravy). 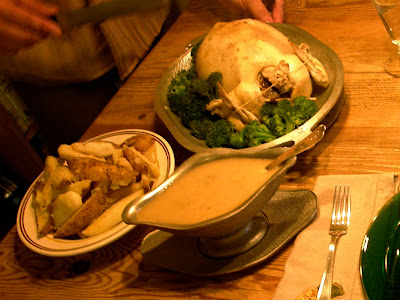 We started with an organically-fed, hormone-free, free-range, whole chicken and organic vegetables (russet potatoes and a white onion, though carrots, turnips, parsnips are welcome additions). The groceries came out to just over $20, but we'll use every bit of this bird to make several meals that will feed us over the week, finishing with a soup from the carcass. Now that's Depression Era cooking the Guardian Service Way. 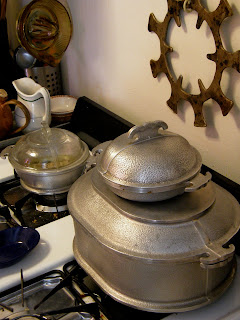 First, prepare the chicken: with a commercially processed chicken, this typically means removing a bag of giblets from the cavity and rinsing, drying and salting the bird.  If you're prepping a minimally processed chicken (perhaps through a Community Supported Agriculture co-op or Farmers' Market), similar to those available when this cookware was manufactured, Betty Gay notes, "singe over an open flame, remove pin feathers with a small knife or tweezers. Cut out oil sac above the tail." My grandmother Pauline butchered her own chickens and little was wasted: our pillows were stuffed with the feathers, she canned the chicken feet along with its meat, and she'd reserve any yolks forming inside the chicken for making egg noodles.

The giblets: In a saucepan (1/2 qt cooker pictured), simmer the neck, heart and gizzard with some chopped onion and celery (we substituted lovage, which has a similar flavor) and enough water to cover. This giblet stock can simmer on low until you're ready to add it to the stuffing and/or gravy.

After removing and rendering the fat deposits near the tail, we used one Tbsp. of fat to sear and brown the chicken in the roaster and the remainder to make the roux for the gravy and to fry the chicken liver for the stuffing. (Note: When cooking a chicken or a smaller roast, we sometimes use the inverted platter in place of the higher, domed lid because it affords an additional cooking surface—pictured above cooking the surplus stuffing in the "Tom Thumb" unit).
Chicken Stuffing
I rarely fuss over a stuffing recipe—bread crumbs, corn bread, challah, herbs, fruit, nuts... keep a varied larder and the sky's the limit. Here's what we had on hand: 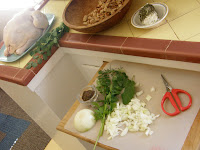 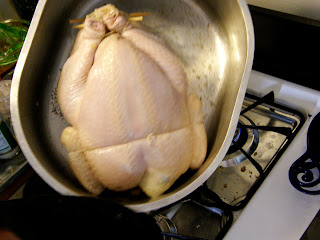 After stuffing and trussing the chicken, lather with butter or, as our friend Nancy Lamb prefers, mayonnaise. Heat a tablespoon of the chicken fat in the roaster over medium heat, add the chicken and sear the skin, turning on all sides until browned. Remove chicken to platter and layer the bottom of the roaster with:
6 potatoes, cut in wedges  (russets pictured above)
1 onion, sliced
Return chicken to roaster over bed of potatoes and onions and set over medium flame. Cover and roast for 20-25 min/lb.
Cooked in the roaster, the potatoes and onions will absorb the chicken fat and caramelize together as a delectable, mealy side dish. If you prefer to roast the potatoes separately, any additional excess fat can be poured off from the roaster and reserved to make the gravy*. 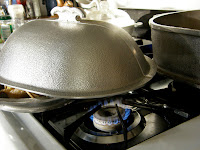 When the chicken is cooked, remove the chicken to the tray and, if further browning is desired, cook using the stove-top browning technique, reflecting the burner heat back onto the chicken.
At this point, we added a cup of broccoli flowerets around the chicken on the platter, covered it, and set the lidded plater over a barely lit burner for twelve minutes. The radiant heat and low additional burner heat was just enough to cook the broccoli to perfection as I prepared the gravy:

Add flour to the last of the rendered chicken fat, cook the resulting roux and add the giblet stock (I also added some left over pasta water) to bring it up to a gravy. Salt and pepper to taste.

*It should be noted, tomorrow being Mother's Day, that my mother's method for turkey gravy (a family tradition) begins with caramelizing all the drippings until they stick to the roaster pan, then pouring off the excess fat and creating a roux from the bottom of the roaster drippings—and nothing compares. BUT, when all that essence is cooking directly into the potatoes, the result is equally delectable. (Pictured below, the Guardian Service gravy boat—a beautiful and functional design—warming over a barely lit burner). 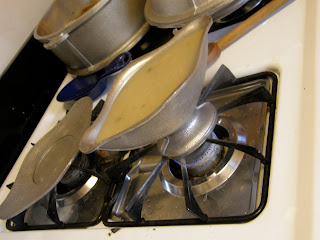