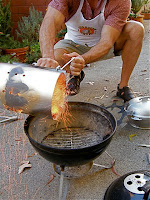 We were spared the scorching temperatures that socked most of the nation last month, but yesterday's warmer weather drove us out of doors rather than face heating up the kitchen for dinner. Our improvised meal was not only memorably delicious, but a solid adaptive use of Guardian Service cookware—a Pan-Asian Fusion meal undreamed of by the cookware's designers, yet one that honors their tenets of nutrition and economy in our common pursuit of "Good Health, Pleasure and Profit."
This method is inspired by tandoori* cooking, though instead of a clay oven, we use a portable 14 1/2" charcoal grill and our Guardian Service Casserole unit. When the coals are hot, the Casserole unit builds up a head of steam, gently cooking the vegetables at the grill's center, while the meat is grilled on the perimeter. The seared meat is then added to the mix. As the fire cools, it finishes the meal at the perfect low temperature required for "waterless cooking" with Guardian Service Ware.
Guardian Service Backyard Tandoori
(Five basic steps. Try any combination of vegetables and/or meats.) 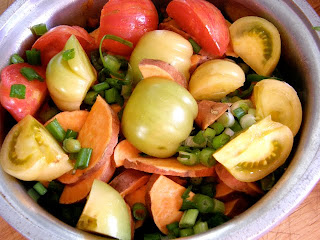 Note the color retention in the vegetables (and thus nutritional retention) from start to finish. The low, constant, contained heat of the waterless cooking method creates an incredibly nutritious meal and works wonders with inexpensive cuts of meat and any variety of vegetables and sauces. 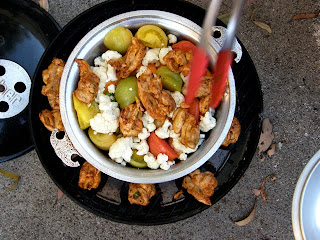 Andrew improvised a Chicken Masala Tandoori last night employing the above method (carrots, sweet potatoes, heirloom tomatoes, cauliflower, jalapeño peppers, scallions, basil and chicken thighs marinated in Masala Sauce  with sesame oil, juice of half a lemon, juice of half an orange, salt and pepper). Served withbread and chutney. Bon Appétit!
*A true tandoor is made of clay and is used throughout India, the Middle East and Central Asia and employs high temperature cooking in a cylindrical clay oven or a grill. Andrew combined the grilled, smoked effects of tandoori cooking, with the slow, low heat requirements of Guardian Service Ware.
* * * * * * * 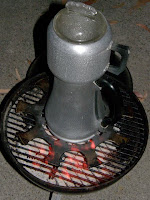 Stretch the fuel economy even further? As dinner was served, we placed a carafe of water over the remaining coals, enough fuel to bring it to a boil and brew a pot of Guardian Service Coffee (with dessert accents of fennel and cinnamon added to the grounds).
Posted by Unknown