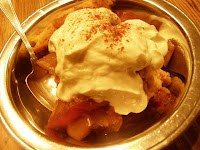 Andrew asked that I send you the recipe for a dessert I made in our Guardian Service Casserole/Tureen cooker the other night. Easy, delicious and an old American Classic and something we imagine EVERYONE will love.

The attached recipe is from "New England Cookbook" (Random House, 1954) by Eleanor Early, a "born and bred New Englander.” I make note of my variation (I was out of cider, so I used some sangria still in the fridge from Christmas--it had cured nicely with orange, pomegranate, apple, raisins and spices--impossible to reproduce but divine...). Let audience and inspiration determine your own variations.

After assembling the apples, sugar, spices, juices and dotting with butter, roll out the biscuit dough (to about a 1/2" thickness, large enough to cover the diameter of the GS tureen) and cut three slits in the dough (doesn’t have to be arty, it’s all going to steam together), then cook it in the preheated outer Tureen liner for 45 minutes or so (on medium heat).

Let it stand for 15-20 minutes before serving. I was half-expecting this to turn out like an upside down cake (since the method is the same), but it's a quasi-cobbler/apple pie (the biscuit dough is more like a thick crust; it steams a bit and melds with the apples below). Just cut through the crust and spoon it out and serve à la mode (or with yogurt the next morning... if there's any left...).

Much love to you all,

And for your listening pleasure, from 1946 (and on 78 RPM, yet!) Dinah Shore sings "Shoofly Pie and Apple Pandowdy."

"This is the recipe of Mrs. Israel Putnam of Connecticut, whose husband left his plough and marched off to join the Patriots. Her great-great-great-great-grandson tells me that his family has been eating it for 200 years." 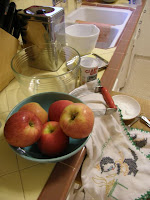 "When I was ten years old I was permitted, as a special treat, to make biscuits one Sunday for supper, and thereafter I made them almost every Sunday for about five years. By that time my ideas of a “special treat” had changed considerably. But the family never tired of baking-powder biscuits. We had them with warmed-up beans and piccalilli and cold meat left over from Sunday’s dinner."